Editor: Nancy Martsch, P.O. Box 55372, Sherman Oaks, CA 91413: beyondbree@yahoo.com
The contents of the publication represent the opinions of writers and not of Mensa, which has no opinions.
$17 per year (12 issues), Foreign $22, Electronic, $10. (PayPal: add 50 cents USA, $1 foreign.)
Make checks in US$ payable to Nancy Martsch. Make PayPal payment to beyondbree@yahoo.com
Contact Us

"Beyond Bree" 2022 Calendar available for ordering 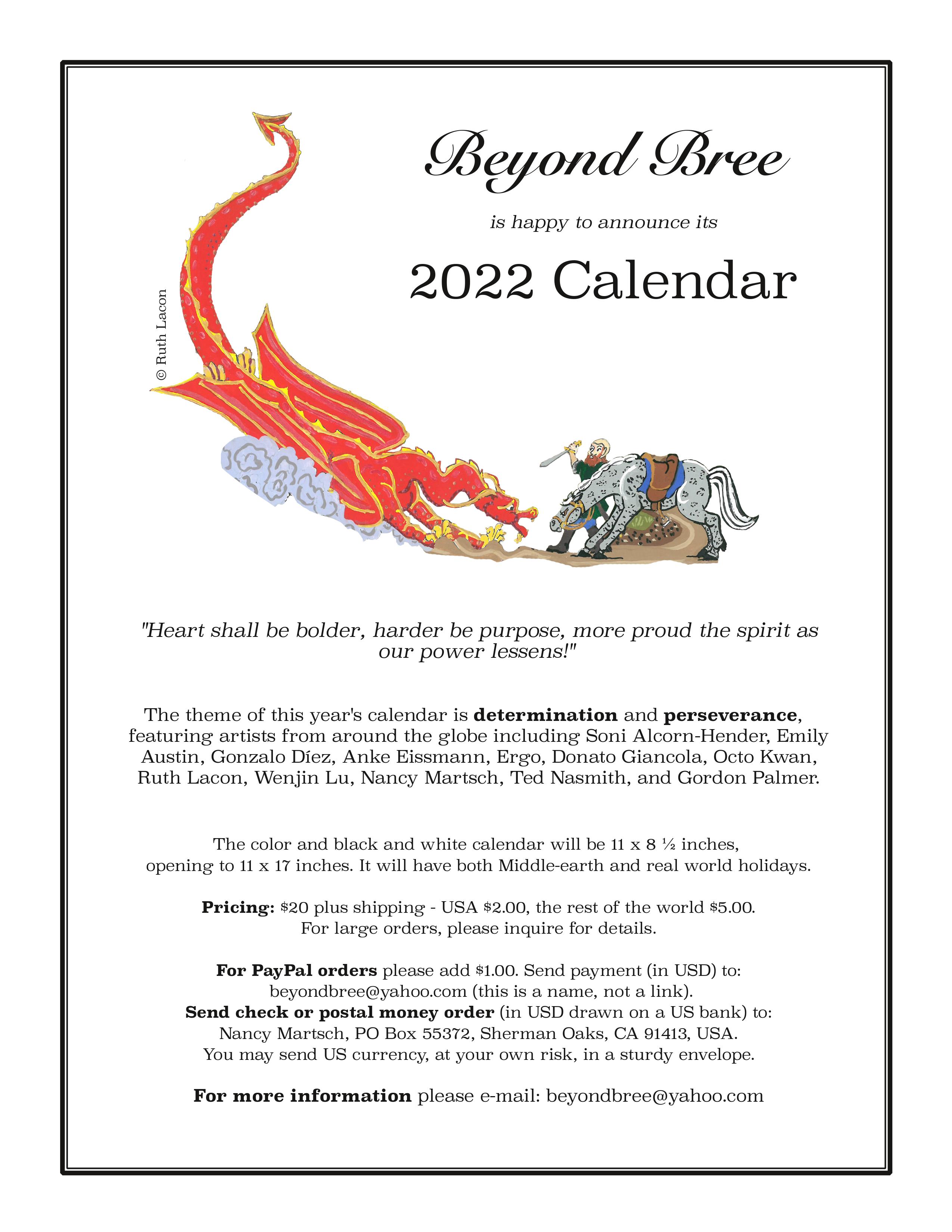 Beyond Bree
is happy to announce its
2022 Calendar
"Heart shall be bolder, harder be purpose, more proud the spirit as our power lessens!" The theme of this year's calendar is determination and perseverance, featuring artists from around the globe including Soni Alcorn-Hender, Emily Austin, Gonzalo Díez, Anke Eissmann, Ergo, Donato Giancola, Octo Kwan, Ruth Lacon, Wenjin Lu, Nancy Martsch, Ted Nasmith, and Gordon Palmer.
The color and black and white calendar will be 11 x 8 1⁄2 inches, opening to 11 x 17 inches. It will have both Middle-earth and real world holidays.

Pricing: $20 plus shipping - USA $2.00, the rest of the world $5.00. For large orders, please inquire for details.
For PayPal orders please add $1.00. Send payment (in USD) to: beyondbree@yahoo.com (this is a name, not a link).
Send check or postal money order (in USD drawn on a US bank) to:
Nancy Martsch, PO Box 55372, Sherman Oaks, CA 91413, USA. You may send US currency, at your own risk, in a sturdy envelope.
For more information please e-mail: beyondbree@yahoo.com
"Beyond Bree" Nominated for Tolkien Society Award!

"Letting Images Speak for Themselves: Tolkien's Rebus Letter to Fr. Francis Morgan, August 8, 1904" by Denis Bridoux, in the October 2020 issue of "Beyond Bree", has been nominated as "Best Article" for the 2021 Tolkien Society Award. The article (without Tolkien's original art) can be read online here, along with the November article with the answer to the rebus and some additional commentary.

"Beyond Bree" reproduces the entire letter, all together for the first time, in colour, along with its history and commentary by Bridoux. (McIlwaine's Tolkien: Master of Middle-earth and the Tolkien Family Album each reproduced only a single page, the latter in black and white.)

The November 2020 issue contains solutions to the rebus riddle.